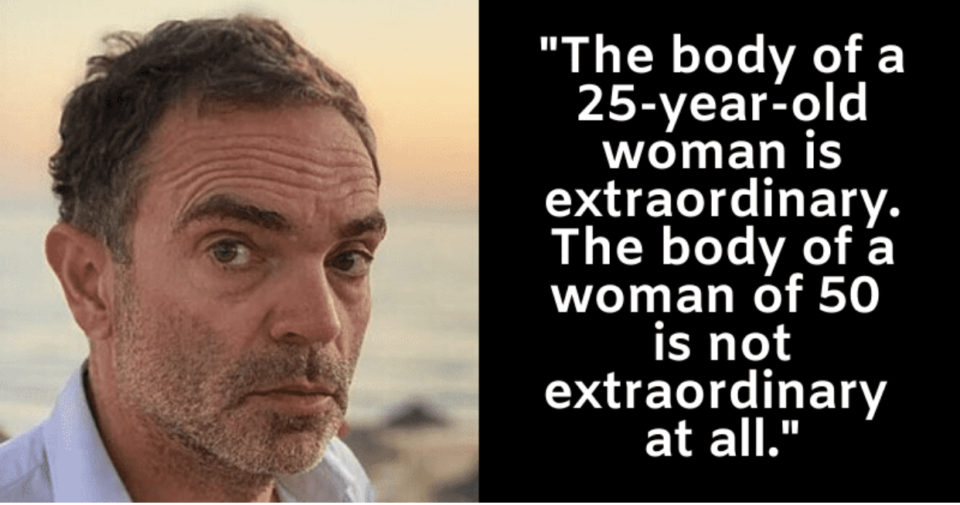 He’s the author of several prize-winning novels. But he’s also earned himself quite the reputation in another department—for being vocally ageist and misogynistic.

When Yann Moix, gave an interview with Marie-Claire magazine’s French edition, he said women in their 50s are “too, too old” for love. The popular author and television presenter was 50 years old when he gave the interview, where he said women his age were “invisible” to him.

Unabashedly talking about his preferences, Yann Moix even said he prefers dating Asian women, especially Koreans, Chinese and Japanese. “It’s perhaps sad and reductive for the women I go out with but the Asian type is sufficiently rich, large and infinite for me not to be ashamed,” he said.

He managed to make things worse when he gave another interview with The Times and didn’t feel apologetic at all for the remarks he made, as reported by the Daily Mail.

Sharing more callous opinions that can make you feel nauseated, he said, “White western women tire me, they wear me out. They make my hair stand on end. I cannot stand them.”

“I am not criticising their exterior intellectual and professional legitimacy or that of being a mother,” he went on to say. “I am saying that in the intimacy of a relationship they don’t bring me anything. I stopped going out with them a long time ago.”

Needless to say, his comments sparked quite the outrage, after which, he spoke to RTL radio trying to defend himself.

“I don’t see this as pride, but almost as a curse. It’s not my fault. We are not responsible for our tastes, our penchants, our inclinations. I’m not here to hold forth on this,” Yann Moix said.

What a happy coincidence! This 50-year-old woman could never love an up-his-own-arse French twat either. https://t.co/wLa4iZMaLp

Trying to defend himself, Yann Moix later said, “50-year-old women do not see me either! They have something else to do than to get around a neurotic who writes and reads all day long. It’s not easy to be with me,” as quoted by BBC.

After reading about what the author had to say, quite a few women, some in their 50s, said they didn’t mind missing out on being wooed by a “sexist”.

so yann moix says the body of women over 50 is not extraordinary at all… well you’re not exactly idris elba are you? oh and by the way these ladies who are all over 50 say hey 👋 pic.twitter.com/kOIJZa3Lu3

Signed Yann Moix, who only dates Asian women at least 10 years younger than him, because, you know, women have an expiration date.

#YannMoix needs to know that it takes a real man to appreciate a real woman.

I wouldn't look at him no matter what his age. #women #agingwithfreedom #charliesangels @marieclaire pic.twitter.com/Us35stMHyu

"… adding that he preferred to date Asian women, particularly Koreans, Chinese and Japanese." On behalf of the Asian community, I am imposing sanctions on Yann Moix 🚮 https://t.co/Psog57S3X5