At 7 years old Emauni J Manley has already made a difference to the lives of young people.

At just 5 years she wrote a book about having a positive self-image after a few mean kids made her feel bad about her appearance.

Now as a 7 year old she is helping those fellow students who can’t afford school lunches and her plea is going out around the nation.

The second grader from Charles County, Maryland, noticed some of her classmates eating a cold sandwich while others were enjoying a larger hot meal.
“I saw some kids just eating a cheese sandwich,” EmauniJ told NBC Washington.

When she asked why she was told those children with a lunch account deficit of more than $25 couldn’t have a hot lunch.

‘Taking the initiative’
The thoughtful, smart 7-year-old decided to do something about this and launched a Facebook fundraiser with a goal of $800. In one day she surpassed this figure and had raised $1,005.

Currently she’s raised almost $4,000 in just under a week.

He said out of 500 students, about 100 receive alternative lunches.

“They can go $25 before they get the alternative meal. Once you get into that deficit, sometimes it’s difficult to come back,” he added. 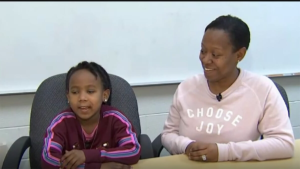 EmauniJ is such an inspiration and at just 7 years old has achieved things most people don’t in a lifetime.
Please share to pay tribute to the awesome EmauniJ.