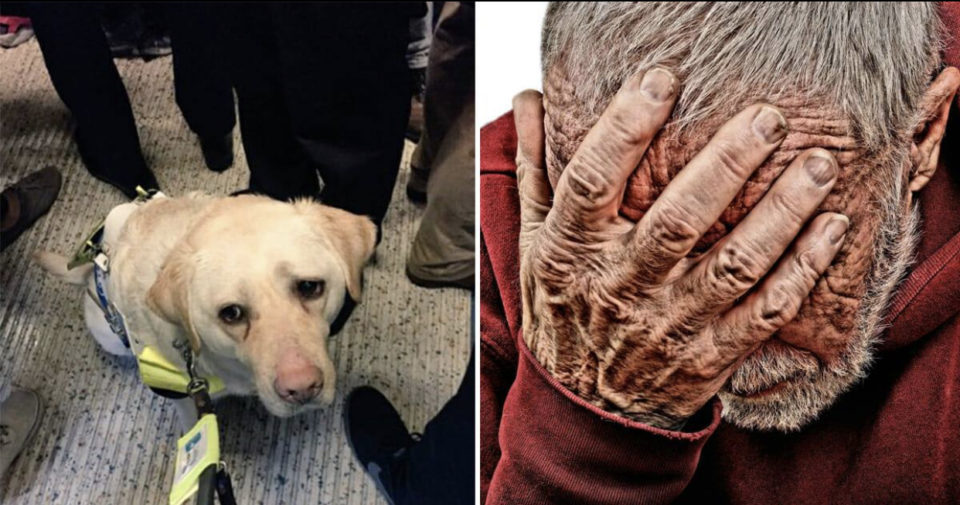 It takes a lot to reduce Amit Patel to tears but, on a day, when not one commuter would give up their seat for him on a packed London train, he was forced to hold back his emotions.

Not an out of the ordinary situation during rush hour when everyone is fighting for a space on their crowded mode of transport and a seat is a prized possession.

But Amit is blind and is entitled to a seat in the disabled section of the train with his guide dog Kika. However, the able-bodied person sitting in the specially designated priority seat refused to give it up.

Not only that, nobody else offered to give up their seat on the busy train, forcing Amit to have to stand up while he slipped and slid on the wet floor of the train.

Up & out early for another windy day in the big city! @BlindDad_Uk's super excited about whatever he's got planned for today, but I'm worried he might be showing his age a bit with this one…! 😂 pic.twitter.com/9NRWbJacpM

Understandably, Amit was humiliated and distressed by the incident telling the Independent newspaper: “It takes so much not to have that one tear come down my face. I come home and think, ‘Does it have to be this hard?’”

Train service apologizes
Amit said he was also subjected to harsh treatment when out with his guide dog Kika recently and was ordered to move on an escalator by an angry commuter.

The service which operates the train has apologized to Amit and vowed to install clearer signs on their trains when it comes to priority seating.

We walked to the end of the platform in the pouring rain so that we can board the designated disabled section on the @Se_Railway train & even with dad giving me the command “find a seat” not one passenger gave up their seat! 😡😤😢@GuidedogsLondon @guidedogs @transportforall pic.twitter.com/MHl0xtw6fU

It’s disgusting that Amit was subjected to this treatment not to mention the people around him not standing up for him. We should be mindful of what’s going on around us and stand up for those who need our support.

Please share to show up your support for Amit and his adorable guide dog Kika. We hope he finds more kindness in the world to make up for the selfishness of these individuals.