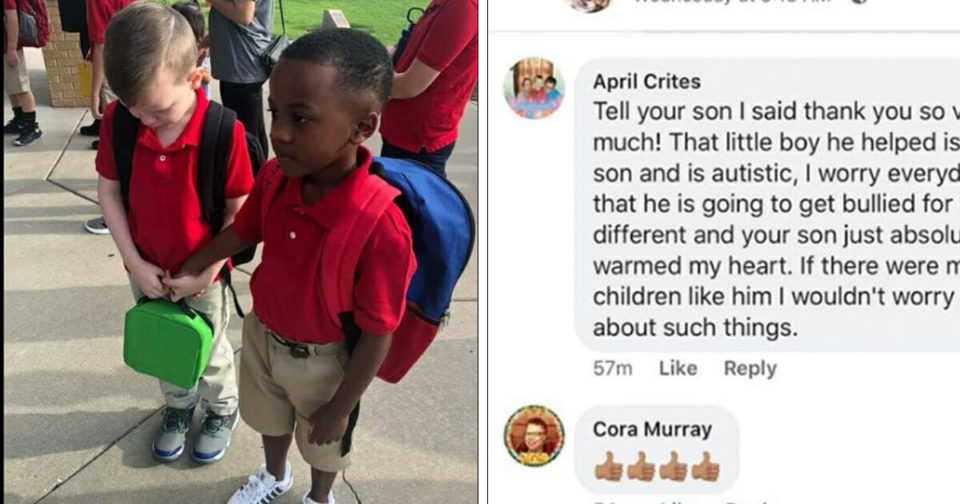 Of course, most children get the same emotions. I can only imagine, then, how a child who suffers from autism must feel.

For one 8-year-old Kansas boy, the day certainly proved an overwhelming one.

Connor Crites was beginning second grade at Minneha Elementary School in Wichita, Kansas. Unfortunately, instead of mingling with his friends, he had moved himself into a quiet corner to cry …
Connor Crites has autism, meaning a sudden surge of new information in a changing environment – such as one can expect from a first day back at school – can prove difficult to deal with.

In response to his surroundings, Connor backed himself into a corner and began to cry.

It would have been easy for him to have gone unnoticed amongst the hullabaloo, but fortunately there was one other child who spotted him. 8-year-old Christian, was also starting second grade, saw Connor and approached him.

He took his hand without a word and walked with Connor into the school.
Christian’s mother, Courtney Moore, witnessed the scene, and took a photo of the boys holding hands.

Speaking to KAKE-TV, Moore said: “I saw him on the ground with Connor as Connor was crying in the corner and he was consoling him. He grabs his hand and walks him to the front door.

“We waited until the bell rang and he walked him inside of the school. The rest is history. They have an inseparable bond.”

It goes without saying that these boys are setting an example all people should be following!

We want to shed some positive light on Connor and Christian.

Help us by sharing this article on Facebook and making sure their picture goes viral.