Brave truck driver sacrifices his live to drive burning truck away before it explodes, saving others 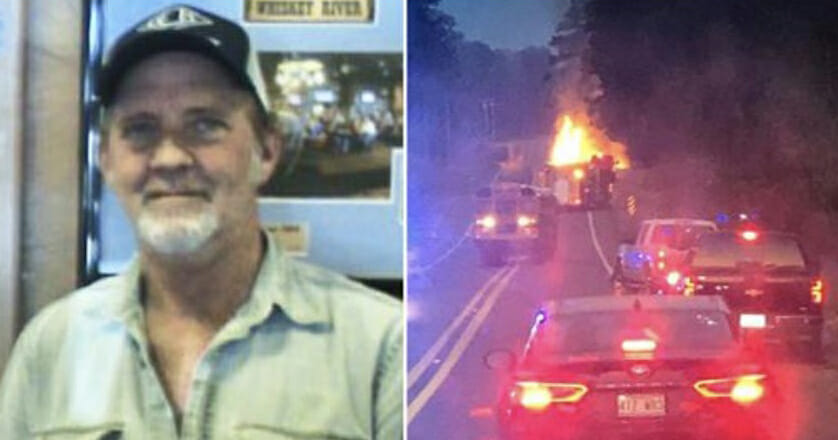 There are some selfless acts that will forever be etched in the minds of the people who were touched by them.

In this case people’s lives were saved due to the selfless act of a 63-year-old truck driver.

With no thought for his own safety the brave man managed to save the lives of many strangers around him. Sadly his concern for others led him to make the ultimate sacrifice.

Now he’s been hailed a hero and news of his bravery is spreading across the nation.

Ouachita Co. Officials say the driver of the truck called 911 because his truck was smoking or on fire. Firefighters and deputies responded, evacuated homes nearby, and about 30 minutes later the truck exploded, killing the driver.

Truck Driver Randall McDougal was driving his commercial carrier truck on the 88-mile journey from El Dorado to Texarkana.

The 63-year-old noticed his truck brakes were on fire while he was driving. Randall then parked his truck in a remote area fearing his truck could explode at any moment.

He could have easily walked away from the scene but instead made sure others were out of harm’s way.

Moved residents out of danger
The brave truck driver then tried to put the fire out himself, officials said.

When firefighters arrived at the scene to move nearby residents out of harm’s way they saw Randall return to his truck.

Crews are cleaning up so they can repair the highway. The explosion left a huge crater that crosses over nearly the entire road. pic.twitter.com/JbMDmFefyL

Tragically, the truck exploded as he got near the vehicle and he was killed.
The impact of the fatal explosion was so powerful that the surrounding trees were leveled to the ground and a massive 15-foot crater was created in the middle of the highway, according to The Epoch Times.

‏“My thoughts & prayers go out to all affected, especially the family of the victim killed in the tragic explosion near Camden,” he said in a Twitter post.
Now the brave truck driver is being hailed a hero on social media.

My thoughts & prayers go out to all affected, especially the family of the victim killed in the tragic explosion near Camden. Please keep our first responders in your prayers as they work to contain this incident. https://t.co/xORz6gWWbJ

“Most would have run–that man IS a hero, and I cried reading the reporting that day. He did everything he could to get people away and tried to put the fire out himself,” one user wrote.

Fnd out more about this tragic story in the video below.

Please share to pay tribute to a hero, who sacrificed his own life to ensure others were safe.