Creepy! This looks like a normal family photo until you see the weird detail under mom’s legs

Taking a family photo should be a nice experience: everyone is happy and smiling for the camera. What matters is that everyone is together, in the same place, making important memories.

Surely, that’s what one family was attempting to do – or was it?

Take a look at this photo. At first glace, it looks totally normal, just a couple and their kids grinning from ear to ear. 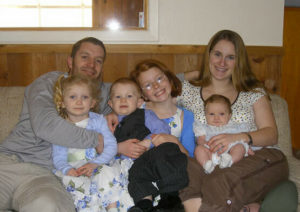 Now take a closer look at the bottom right corner, under the mom’s legs… Do you see it now? 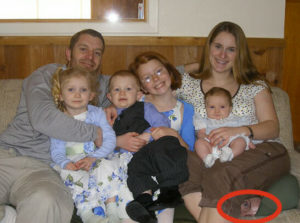 That’s so creepy! What do you think is going on here? Do you think that was added in digitally or did a family do something naughty to deserve such treatment?

But wait! There’s more…
Now take a look at these other photos… Can you spot what’s wrong with them?
At first glace, it just seems like this group of young women is hanging out at the beach, commemorating their trip with a photo. They pose in their bikinis, but don’t know that there’s a man behind them. 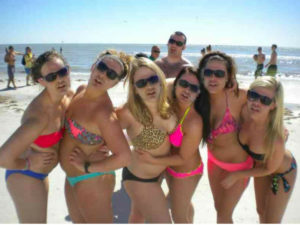 Now take a closer look at that man, and now check out the faces of each woman… Do you see it? 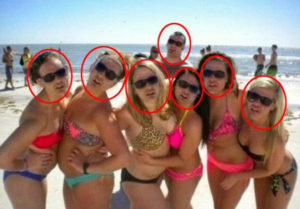 That’s right! Every single woman in this group photo had the face of the man behind them. We’re fairly sure that this is the photo of a crafty photo editor, but it’s so easy to miss!

How about this one that’s a real head-scratcher? 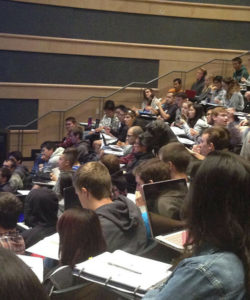 It may not seem like there’s something off about this photo. It looks like a study hall or university auditorium, where students are taking notes in class.

But close to the center, there’s an adorable intruder. Do you see him? 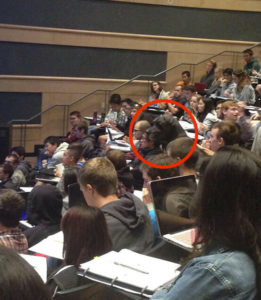 It’s not even human! This furry four-legged friend is dropping into class, ready to learn by his human!

Here’s another beach one for you to check out… 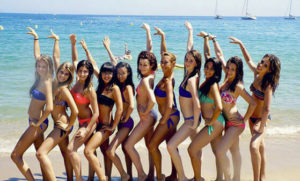 All these pretty ladies in bikinis look so confident, but little do they know there’s an extra in the background. Do you see him? 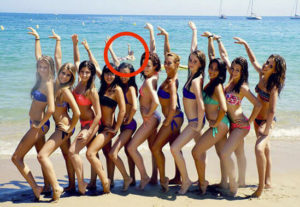 There he is! He probably saw his chance to poke a little fun at the women, and posed exactly like them not knowing if he’d make it in the photo or not. It turns out, he did!

Now check out this couple kneeling at the altar on their wedding day. Such a touching scene! This husband and wife-to-be are ready to start their lives together… Or are they? Check out the photo for a clue… 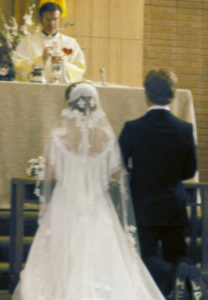 Do you see it? Here’s a hint: look at the groom’s shoes.
Here it is: 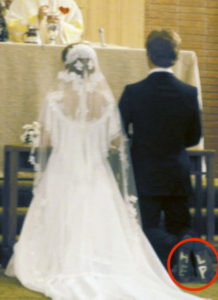 Talk about getting cold feet!

Here’s one last one for you. These young men are clearly having a great time, all dressed up for Halloween. 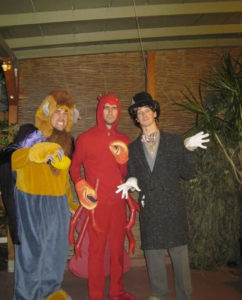 Now, take a closer look at the tree behind them. Everything seems normal until you see it… Did you figure it out?

When you do – wow! How creepy is that? I would totally freak out if I saw that behind me. 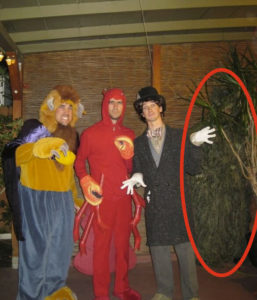 There’s a FACE in the tree! Hopefully, the man is just hiding behind it. If that’s his costume, he definitely went all out!

Have you seen anything creepy in any of your photos? Some people are convinced that ghosts have made appearances in their photos, for example. These may not be ghosts, but they are creepy either way!