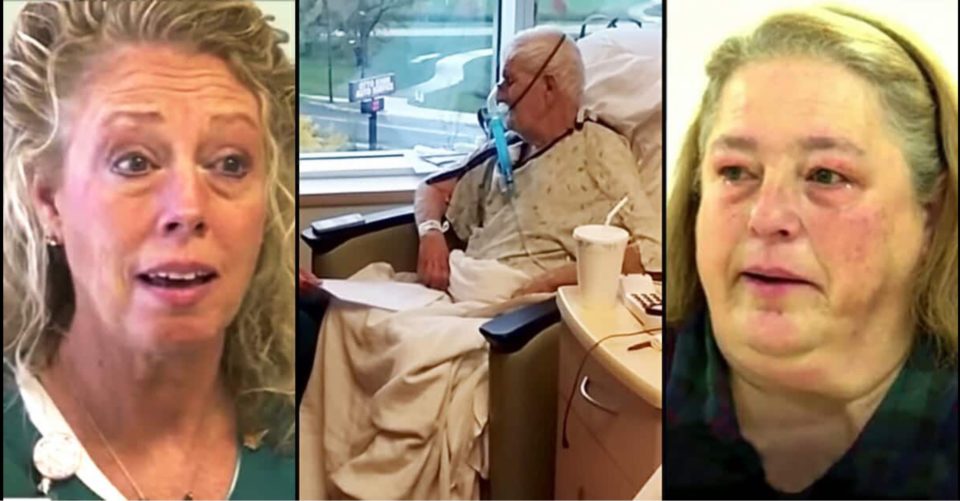 When ailing patients come into a professional setting, we expect nurses and doctors to do whatever they can to help them recover and thrive.

Sadly, hospice nurses can often only make their patients comfortable and provide support during their final days.
One such elderly gentleman entered a Kalamazoo hospice at Bronson Hospital, where his loving daughter often came to visit him.

However, on one visit, she noticed her dad’s carers getting up to something unusual, and straight away knew she needed to video what was happening.
Rob Olson, 85, appeared as though he was fit and healthy at retirement. Shortly after, however, his health started to deteriorate rapidly, and he started to suffer from breathing difficulties. He was struggling to survive.

Rob’s family were devastated that he might not leave the hospital, and he was entered into hospice at Bronson. For the majority of patients, this is a sign that the end is near.

Brenda Buurstra is a hospice nurse and has a reputation for going the extra mile when it comes to comforting and cheering up her patients.

She began caring for Robert, and quickly, the two developed a strong bond. Rob’s daughter, Roberta, hoped she could spend her dad’s last moments by his side. She visited regularly, making sure he was being treated well and in good spirits.

On arriving, Roberta spotted Brenda giving her dad a ‘different’ type of nursing care from other hospice patients. Roberta then spent her visits letting others know about Brenda’s unusual style…

Apparently, Roberta secretly filmed Brenda the nurse while she was giving her dad an ‘untraditional’ form of care.
Robert informed his nurse about his huge love of a certain song: “You Light Up My Life”.

The following day, Brenda came back having printed the words for the song on a piece of paper. She asked Rob if he would sing along with her, and she’d memorized every last word. Brenda sang to the elderly gentleman while he listened, captivated.

“He said, ‘My favorite song is “You Light Up My Life”.’ And I just started singing it,” said Brenda. Roberta couldn’t believe what she was hearing when Brenda began to sing.
In no time, she’d whipped out her camera and started to capture Brenda’s touching and compassionate gesture. Her thoughts? “I’m just blown away because the woman’s got a voice,” Roberta told ShareTap.
Amazingly, as she looked on, her elderly dad started singing along, despite being hardly able to talk. The happy daughter explained: “Even through his little venting mask he was wearing, his eyes lit up. His whole countenance changed, and he had a big smile”.

Noone was thinking Rob would manage to croon alongside the one-of-a-kind Brenda, yet that’s exactly what happened.

“You could tell that song lit him up. Literally ‘You Light Up My Life,’ that song really just lit him up. You could tell it touched his heart.” While Brenda’s kind efforts for each and every patient never go unnoticed, she gave Rob a special kind of care.
A few days after she’d given her private musical performance, he started to recover.

His doctors previously warned Robert’s relatives that he’d probably pass away in hospice, yet only seven days later, Rob was released and on his way home.

His loved ones say Brenda’s kind treatment is what made the difference, recalling how he was hardly able to talk when first being admitted.
As Brenda shared with WMMT: “He has heart problems but because of his age, they can’t put a pacemaker in.” He had an episode at the house, and he couldn’t breathe. So they took him to Bronson Hospital. He was there about a week. We did not think he was coming home this time.”

“I wanted to be on a team of positive people, and that’s what we have here at Bronson. I’m not the only nurse who goes above and beyond at Bronson. This is what we do every day.” Please share this article on Facebook to pay tribute to the wonderful job nurses do and for those that go above and beyond for their patients every day!§