Sometimes when you see an animal in need of rescuing, you just know you have a connection with them.

That’s exactly how Nick Abbott felt when he came across a Facebook post asking to find an adorable black lab mix named Emerson a forever home.

“I was drawn to him right away because we had similarities,” Abbott, 31, told CBS News. “I felt I could understand him.”

Thank you for visiting our official instagram page! Please follow Emmy and I on our journey though life together. We will share updates, new tricks learned, and our adventures! #rescuedog #NickAndEmerson #Deafboys #unbreakablebond #rescuedogsofinstagram #NFR #adoptdontshop #adoptionjourney #blacklabpuppy #blacklab #puppiesofinstagram #love

At just six weeks old he was rescued from a shelter in Florida and transferred to NFR Maine, a foster-based rescue. Unlike his siblings, Emerson didn’t hit the ground running. He suffered seizures and was then diagnosed with canine parvovirus, a highly contagious infection.

Luckily, he survived. But there was something else veterinarians noticed about the small puppy, he had partial hearing loss.

“He doesn’t let it bother him at all, though he’s a typical puppy,” Lindsay Powers of NFR Maine told Good Morning America. 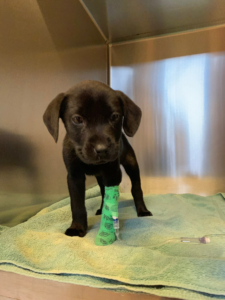 Soon Emerson was put up for adoption and Powers said there was one application that stuck out to her.
“Right off the bat he said, ‘I’m deaf also and I feel like we’d have a good connection.” 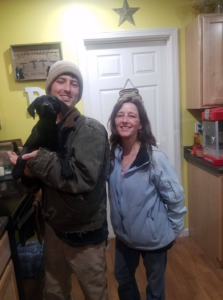 That application belonged to Abbott, and it didn’t take long for Powers to contact him and arrange a meeting between the two.

“He came straight to me at the door and sat right away at my feet and stayed there,” Abbott told WABI. “So you can tell he kind of picked me. And I knew right then and there that we would get along and understand each other pretty good.”

They were meant to be.
Since adopting Emerson, Abbott has been training the young puppy all of the usual commands using sign language.

Emerson is able to sit, lie down, stay, and follow a few other commands.

Richelle Abbott, Nick’s mother, called her son and his puppy’s relationship “amazing,” stating they were “meant for each other.”

“Whenever they’re together, Emerson is always finding a way to lean on Nick,” she told Good Morning America.
Since adopting Emerson, Nick started an Instagram account where he plans to post about “two deaf boys and their adventures.”

“This will go down in history as one of my all time favorite adoptions stories,” NFR Maine shared. “This will be the story I tell people when they ask ‘Why/how can you foster like that’ That question has A LOT of answers, but the easiest is love.”

Emerson’s life started out rough and when all of his siblings were adopted, it looked like his bad luck might continue. If it wasn’t for someone like Nick, who saw something in him that others saw as a disadvantage, who knows what would have happened to the little guy.

Pass this article on and spread awareness that all animals should be given a chance, no matter what disabilities they may have.