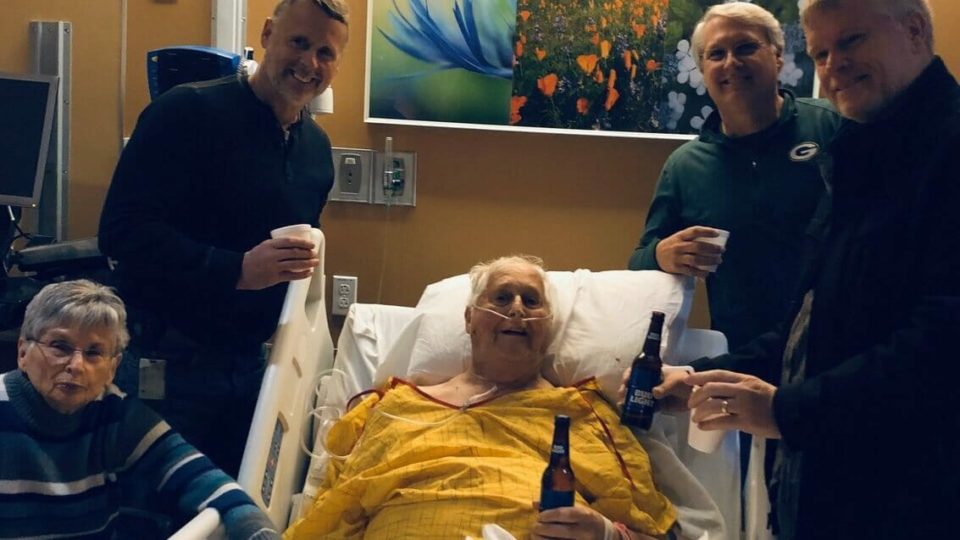 Many men can fondly remember the first beer they shared with their dad. But for one family, it was the last beer that really counted.

It’s a question we’ve all pondered at some point: how would we spend our final living moments if we knew they were the last? Like many people, 87-year-old Wisconsin man Norbert Schemm wanted to go surrounded by his loving family.

But instead of it being a teary-eyed farewell, he wanted it to be a moment they could all remember happily… so he gathered his sons to share a beer with him one last time.

My grandfather passed away today.

Last night all he wanted to do was to have one last beer with his sons. pic.twitter.com/6FnCGtG9zW

The grandfather had been in the hospital for a week battling stage IV colon cancer. As his condition worsened, he sensed his time was running short and called his family to his side for a cold one.

While facing the death of their loved one must have been heartbreaking, it ultimately meant a lot to the family to have a final happy moment with him.

“It was a really good family moment that I know meant a lot to everyone,” grandson Adam Schemm told CBS News. “The look on everyone’s face is something to cherish, they are all smiling including my grandfather.”

“He’s doing what he wanted to do,” he told the BBC. “When I look at that picture it gives me solace.”

It’s a beautiful photo, but it was such a personal family moment that Adam was hesitant about posting the story online. But when he did, it went viral… and promoted others to share their own memories of a final drink with their loved one:

Did the same thing with my Dad in May. Cold beer and a Yankee game. My condolences pic.twitter.com/aNSULc7AT8

I don’t know you… but I felt this. Days before my grandpa passed he let my dad and I know he wanted a cigar and a beer. We made it happen. I’m so sorry for your loss. Your grandpas smile is one for the books! pic.twitter.com/HDv3y2kLeA

My grandmom did the same thing but with shots of Bailey’s 😭💓 pic.twitter.com/LjSg757YIn

Those stories, and their words of condolences, made Adam glad he shared his grandfather’s story.

“It seems to have tapped into a sense of community and clearly is a moment lots of people relate to,” he told BBC. “I thought people I knew might want to see it and respond but had no idea just how many people it seems to have helped.”

And this viral fame is something his grandfather would’ve enjoyed.

“He would have got a laugh out of it,” Adam said. “I think the biggest lesson to be learned and what I believe my grandfather would say is to ‘be kind, love each other, and that family matters.’”

Losing a loved one is always painful, but it really helps to have happy times to look back on. It’s wonderful that even in their darkest hour, this family was able to make one last great memory.