People might argue to the contrary, but I think at this stage one has to accept that all animals have feelings. Some more than others, sure, but long gone are the days where we could look at the animals we share this world with and simply label them beasts.

Animals are capable love and grief, of fear and happiness, and every so often images or videos will capture moments where they truly show how in-tune they are.

On PBS, back in 2000, one such moment was witnessed on the back of a story that quickly gained worldwide attention. It concerns two former circus elephants that had been separated for an incredible 22 years. Captured footage showed the heartbreaking moment they reunited, and it’s not something you want to miss … 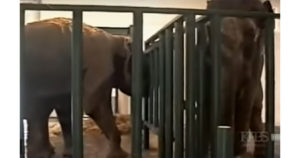 The footage was documented at the Elephant Sanctuary in Tennessee, where we see the elephants Shirley and Jenny meeting each other for the first time in over two decades. Now, we all know that elephants have an incredible capacity to remember things, but the display of love and affection on show here is truly eye-opening.

Even the keepers are left taking aback as the two elephants rekindle a friendship forged when they were both circus animals. 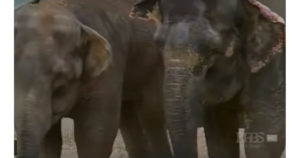 Recognizing each other immediately through the gates, Shirley and Jenny waste no time in bridging a void of more than twenty years.

Watch the astounding footage in the video below:

ALL animals deserve a happy life on this earth.

We have no right to keep them captive! Share this article if you agree.