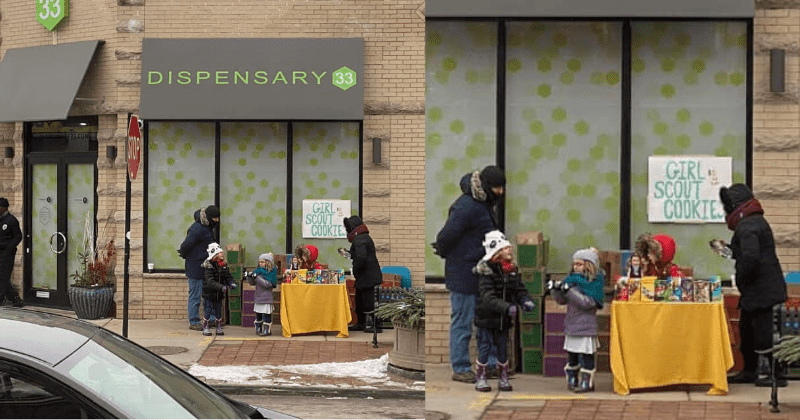 A bunch of little girls recently turned into successful mini-entrepreneurs with an ingenius sales tactic. The troop of Girl Scouts, aged 6 and 7, chose a very promising location to set up shop and sell Girl Scout cookies.

It was right in front of a recreational marijuana dispensary in Chicago where the adorable girls set up their cookie stand, with several boxes of Thin Mints and Samoas stacked beside them. This meant that every single person stopping by Dispensary 33 could get their weed as well as their munchies at the very same place.

What a great way to make things easier for those living the high life.

Reporting to you live at Dispensary 33. We have Girl Scout cookies!! And not just the cannabis kind😩😩 Support your local Girl Scouts with us 🍪🌿 (We have very limited flower for all you stoners. First come first serve. Come through while supply lasts) pic.twitter.com/zmXSfmwoFl

The girls were able to sell a whopping 230 boxes of cookies in just four hours on Sunday, February 9, 2020, according to Chicago Tribune. What worked in their favor was the timing of it all. Given the fact that legal weed went on sale in Illinois on January 1, the Girl Scout cookie season came just in time, allowing the 6-year-olds and 7-year-olds to take advantage of those who are queuing up in significant numbers outside weed dispensaries.

The newest location to buy Girl Scout cookies in Chicago? Outside of a recreational marijuana dispensary. https://t.co/sQmthb0wHz pic.twitter.com/h47JrbglDg

Paul Lee, who is the general manager of Dispensary 33, pointed out that over 500 people walk in and out of the dispensary, and many of them are also looking for some good bites to pair up with their buy. Lo and behold, a tiny army of Girl Scouts waiting right outside the dispensary with boxes and boxes of cookies to offer.

I bought 5 boxes from these awesome lil ladies!💚💚 pic.twitter.com/Gk9tdOk538

Dispensary 33 was more than happy to let the little girls sell their cookies; they were quick to agree when the little girls got in touch with them to ask if their stands could be set up right outside their shop.

“The cookies they’re selling and our clientele, it’s a great match,” said Abigail Watkins, marketing and outreach manager for the dispensary, according to Block Club Chicago. “As a former Girl Scout, I admire the hustle.”

Abigail Watkins added, “People were having fun. Everyone loves Girl Scout cookies. They were undeniably cute.”

Although the group was able to sell about 450 boxes last year in a single day when they stood in front of a Mariano’s, one of the Brownie troop leaders named Melissa Soukup said “It was a decent sale,” while talking about the 230 boxes that they sold.

Melissa Soukup, who is also the mother of one of the girls, was glad for the help provided by the dispensary’s security in setting up the stand. She said, “They were super supportive. It was a pretty good sale, probably one of the better ones.”

With the table sales of the $5 boxes of cookies going in full swing, the Girl Scouts of Greater Chicago and Northwest Indiana are allowed to put their cookie stands up wherever they want to but must ensure that the businesses are owned and operated legally, according to Britney Bouie, the public relations manager.

“Our girls sell from everywhere — outside of movie theaters, grocery stores,” Britney Bouie said. “And now if they’re selling outside of legal and aboveboard dispensaries, that is A-OK.”

For Dispensary 33, too, it’s a sweet spot for them to be in and they are planning to have different troops of Girls Scouts selling cookies over the weekends in February. What’s also interesting is that two products at the Dispensary 33 that were linked to a popular strain of marijuana, originally called Girl Scout Cookies had sold out. “Maybe that was because of the Girl Scouts,” added Abigail Watkins.