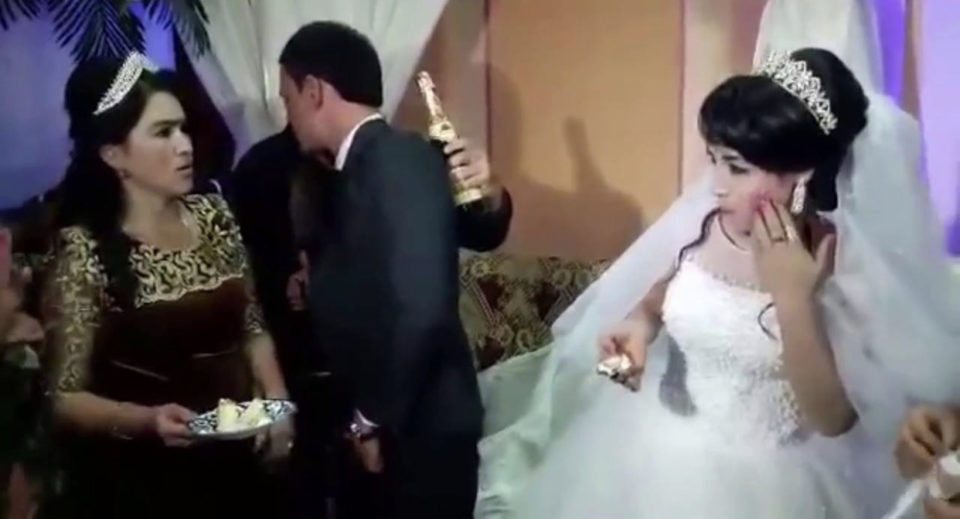 It’s usually after a couple of years or years when a married couple starts to think, “What was I thinking when I walked down the aisle?”

However, that thought probably crossed the mind of this bride not long after she tied the knot with a guy who takes the cake for being the most disrespectful assh*le at his own wedding.

The highly disturbing footage from the wedding was captured when the newlywed bride and groom were cutting their wedding cake. According to the Daily Mail, the video is believed to have been captured in Central Asia, while The Sun reports say that the clip was claimed to have been filmed in Uzbekistan.

The video starts with the groom feeding his bride and when it was the bride’s turn to feed her groom with a piece of cake, she playfully teased her new husband by pulling the cake away from his mouth just before he could bite into it. But the angry groom’s response to her affectionate gesture was a slap on her face.

The slap came out of nowhere with such force that the bride actually lost her balance and fell into the chair behind her. If the lack of sense of humor and concern for his new bride were not bad enough, what’s worse is how aggressive the groom was, being violent with no care about the guests watching.

The groom’s unacceptable and abusive behavior was slammed online and even in the comments of the YouTube video.

“If hes prepared to do that in public on their wedding day then i dread to think what he’s capable of behind closed doors,” said Nathan Parsons.

t0nito’s comment read, “If she were my daughter that man would need facial reconstruction and plastic surgery after a stunt like that.”

“If that was my sister I would shove the whole cake down his gob and take her home,” wrote kishmish64.

When the incident was posted on Reddit, one person had a very well-thought-out suggestion about how the groom should be dealt with: “This guy should have his cock sawn off with a bread knife and jammed sideways up his ass by a gauntlet-clad fist sprinkled with salt then dragged by his pinky through a cheese grater factory by a Learjet. He’ll def learn patience and humility from such an occurrence.”