We realize the strong bond animals have with humans when tragedy hits. For sweet horse Sereno his world fell apart when he lost his best friend and owner, Wagner Lima.

The 34-year-old cowboy from Paraguay died on New Year’s Day 2017 in a tragic traffic accident in Brazil.

His horse was brought to Wagner’s funeral and what occurred during the procession left many in tears.
Wagner and his horse Sereno were very close and had worked together in rodeos for almost a decade.

His brother Wando said Wagner made a lot of sacrifices to look after his four-legged friend.

”He had a passion and a great love for him,” says Wando.

”Sometimes he would even stop buying things for himself to make sure he could afford to buy horse feed.” 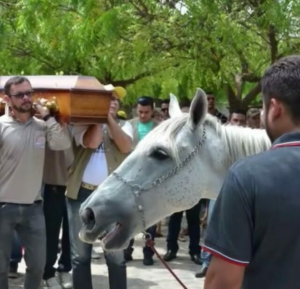 On New Years’ Day 2017, Wagner Figueiredo de Lima was involved in a motorcycle accident in Brazil. He underwent surgery, but did not survive.

The funeral was attended by many people mourning the tragic loss of such a character. Family and friends, including Wagner’s horse Sereno, gathered to pay their final respects.

But they were all stopped in their tracks when they saw the reaction from Wagner’s beloved horse…
Sereno marched with the funeral procession and when the casket got close enough for Sereno to smell it, the horse did something that shocked everyone.
“[Sereno] began to walk around the coffin, smelling the coffin. Then he neighed,” attendee Kyioshi Abreu told The Dodo.

“It was a very strong emotion. Everyone who was there was moved. I cried myself when I saw that scene.”

“This horse was everything to him [Wagner], it was as if the horse knew what was happening and wanted to say goodbye. All the way to the cemetery he would whimper and beat with his paws on the ground,” Wando told Globo News.

At one point Sereno gently placed his head against Wagner’s coffin.

See the horse’s heartbreaking reaction in the video below. It’s moved so many to tears.

This just breaks my heart. Poor Sereno knows his owner is in that coffin.I wish I could give him a big hug and let him know that everything will be just fine.

I’m so glad that Wando will take care of Sereno and give him all the love he deserves. Now sweet Sereno will have a home with Wagner’s brother Wando and his family.

This just shows how deep animals’ feelings are for the humans that love them. Please share with all your animal-loving friends.