Husband in wheelchair goes behind bride’s back on wedding day, she burst into tears as priest says ‘rise’

For most people, a wedding isn’t just a day to throw a big party and celebrate, nor simply an occasion to pledge fidelity to each other for the rest of your lives. It’s so much more than that, and as such it’s a day that is often planned down to the very finest of details.

For Kevin and Kim, their big day promised to be an emotional one, especially since Kevin was hiding a secret.

When Kim walked down the aisle to join her would-be husband, he revealed said secret … and left his bride in rivers of tears.

18 years ago, a young Kevin Taylor broke his leg. It was then that he found out he suffered from a nerve disorder known as sympathetic reflex dystrophy, a syndrome that causes sharp, burning pain whenever the affected body part is touched.

Loss of his legs
The syndrome is extremely difficult to live with, as well as being unusually rare. Making matters worse, Kevin was suffering from the worst type of reflex dystrophy, forcing him to visit the hospital every two months. 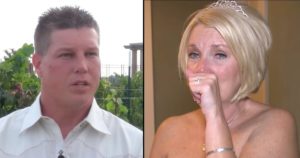 The doctors agreed that they could not save his legs. Kevin had to use a wheelchair thereafter, but continued to live his life to the full, an ever-present smile on his lips.

“As I see it, it could always be worse,” Kevin told Fox34.
Kevin was simply grateful that he could still live his life. Things also took a turn for the better when he met Kim Didway.

Love of his life
It was love at first sight for the pair. It didn’t matter to Kim that Kevin was in a wheelchair, and that in turn improved Kevin’s self-confidence.

“She looks at me as if I’m not sitting in a wheelchair,” Kevin said. “I mean, she’s always seen past it.

Kim, meanwhile, explained: “I didn’t care at all about it, because it’s about the person inside, not physically. His heart makes up for whatever limbs he’s missing.”
Preparations for wedding
After a number of months together, Kevin and Kim decided to get married. They planned their special day down to the biggest detail, and before long everything was ready for an epic and love-filled wedding. 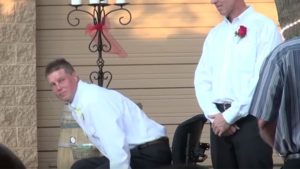 What Kim didn’t know, is that Kevin was hiding a secret from her. He’d been working behind her back, training in secret with a physiotherapist so that he could use prosthetic limbs.

Kevin had long since decided that when the priest asked everyone to rise, he wanted to do so too.

Kim walked down the aisle towards her boyfriend, only to see him unexpectedly stand.

Tearful surprise
Naturally, Kim couldn’t believe her eyes. The tears began to flow as she approached, before the two lovebirds embraced in an emotional hug. 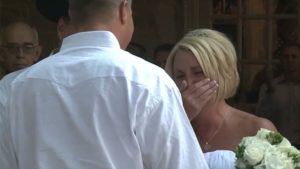 Kevin had wanted to make heir wedding day the most special of their lives … and so he did.

Their story is truly a reminder to always live your life to the full. Or, as Kevin said: “Live every minute as if it’s the last.”

Watch the incredible moment Kevin and Kim meet at the alter in the video below:

Kevin’s surprise is among the most beautiful I’ve ever seen.

Please share this article if Kim and Kevin’s story also warmed your heart.