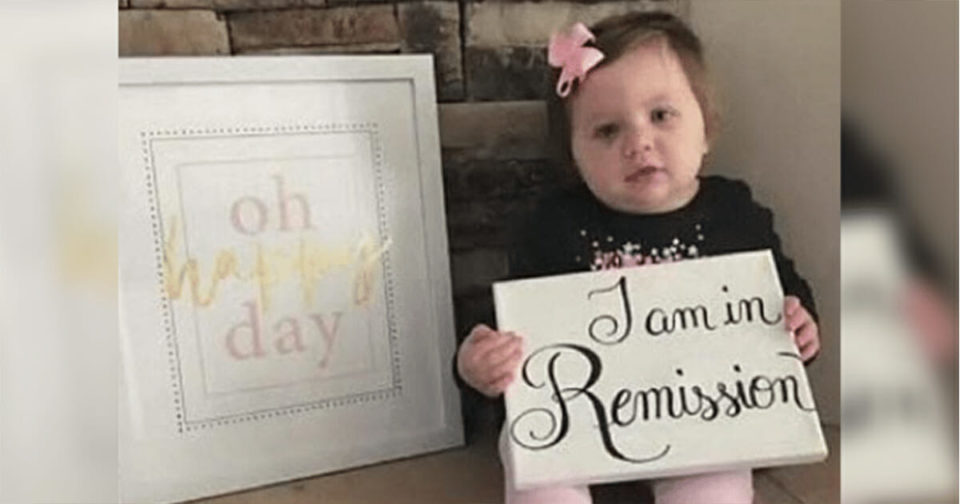 The family of a 21-month-old girl diagnosed with stage 4 cancer is celebrating after it was announced she is now in remission.

According to reports, Molly Hughes had been diagnosed with neuroblastoma and spent 130 nights in hospital while she underwent a gruelling course of cancertreatments.

Fortunately, Molly turned out to be one tough cookie indeed … Molly’s mother, Chelsea Hughes, said: “She would just bounce back after every treatment. I mean she would knock her down for few days and then she would be at playing again.”

The term #MollyStrong became the slogan for the little girl’s family and friends, who remained steadfast in their belief that she would win through despite her bleak prognosis.

Indeed, months after being handed the news that could have shattered their world, Molly’s mom has revealed how she received a phone call that produced very different effects.

“I fell to the ground after I got off the phone and I just hugged her for like five minutes,” she said. She also credits prayers as having played a big role in her recovery against the odds.

“I believe that’s what helped her get through all this. With all the prayers she’s heard and which I can’t thank everyone enough for.”

We’re so thankful little Molly was one of the survivors of this terrible disease. And yet there remain millions of children out there who won’t be so lucky so long as no definitive cure exists.

With that in mind, we think it’s more important than ever to continue raising awareness. Please share this article to help all the babies like Molly around the world.