If you grew up with a sibling, you’ll recall all too easily how often you were at each other’s throats.

Arguments, petty quarrels, and verbal barbs are commonplace, but there’s also – most of the time – a strong bond of love that runs as an undercurrent.

After all, who are your brothers if not life-long friends bound by blood?

When you have been apart from your brother or sister for a very long time, it’s usually very emotional and special once you meet up with them again.

And well, I think I’ve found a video that proves just how powerful the connection between brothers can be.
Sam, a young man with Down syndrome, had been waiting patiently for a very long time to visit his younger brother at his work.

His younger brother, Jack, works at a well-known and important place, Windsor Castle.

Jack belongs to the Queen’s Guard and his duty is to protect the Queen of the United Kingdom. It may look like it, but these guardsmen are no toy soldiers. 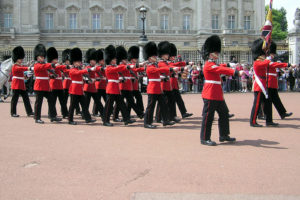 Throughout history, few units in the British army have received more praise for their heroic efforts on the battlefield.
With no doubt, it’s a huge honor to be a member in the Queen’s Guard. According to the Today I Found Out, it’s serious business.

Consisting of soldiers (mostly) hand-picked from five elite regiments within the British military, the Queen’s Guard are internationally renowned for their stoic dedication to duty. However, contrary to popular belief, these soldiers are permitted to move (and do so regularly, even when just on guard duty and not on parade) and in certain circumstances do react to hecklers or the like.

That said, while on duty outside one of the Queen’s residences, these sentries are trained to remain unflinching in the face of everything from extreme weather to screaming abuse a few inches from their faces. 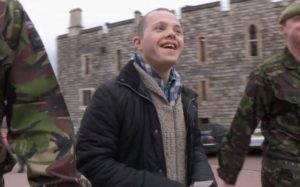 Of course, Sam was excited to see his younger brother stand proudly in his uniform and the typical bearskin hat.

Sam explained that this was the first time he would see Jack in his uniform.

But before he could enter the grounds of the castle, Sam was gently briefed by some of his brother’s colleagues. 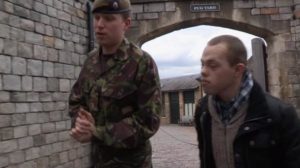 They told Sam what he could and couldn’t do. For example, Sam was allowed to stand beside his brother, but Jack was not permitted to speak or look at his brother while they visited.

After the short briefing, the three approached Jack, who was dressed in full winter uniform, which includes a long gray coat and bearskin.

Now look what happens when they make eye contact… This is so awesome ? get your tissues ready…

So awesome to see them together! What beautiful love between these two brothers. This is an amazing thing the Queen’s guards have done to make this special young man feel welcome!
It was wonderful how they brought him to see his brother working and explained what he could and could not do and then took him back into their living quarters to see him.