A lot of people work at McDonald’s at some point in their lives. It’s the first job for many teenagers, and recently, we’ve been seeing an upturn in fast food restaurants like McDonald’s hiring senior citizens. But it’s rare for someone to be at McDonald’s for long enough to have a retirement party. 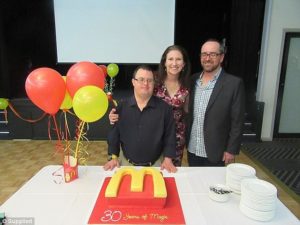 Russell O’Grady, 50, of Sydney, Australia first put on a McDonald’s uniform in 1986 when he was 18 years old. Russell has Down syndrome, and he began his McDonald’s career at a time when few people with Down syndrome sought out jobs. Though these special people are frequently entering the workforce now, it was rare in the 1980s.

Russell first got his McDonald’s job via a program in Australia called Jobsupport, but he did such a great job at it that he moved into a more long-term job with the restaurant packing party boxes. 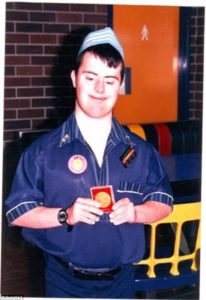 He has become a bit of an icon in his community of Northmead. He was frequently greeted by familiar customers as he cleaned tables and greeted customers. Many visited the restaurant just to see him. The friends he made in his job at McDonald’s even called him “the best-known person in Northmead,” reports The Daily Mail.

“WE’VE GOT REGULAR CUSTOMERS WHO COME IN TO SEE RUSSELL ON THURSDAY AND FRIDAY, AND THE STAFF LOOK AFTER HIM, SO WE’RE GOING TO MISS HIM,” SUPERVISOR COURTNEY PURCELL SAID.

Russell’s family is proud of him, his younger brother, Lindsey, said.

“HE’S KIND OF BLASE ABOUT IT BUT LOVES HIS WORK VERY MUCH. HE’S PRETTY CHEEKY SOMETIMES. HE’S MY BIG BROTHER AND HE KEEPS ME IN LINE,” HE SAID.

“HE’S VERY AFFECTIONATE, DEARLY LOVED AND APPRECIATED, TO SUCH AN EXTENT THAT WE JUST DON’T BELIEVE IT.”

“SOMEBODY SAID TO HIM ‘ARE YOU HANDICAPPED?’ AND HIS ANSWER WAS ‘I USED TO BE WHEN I WENT TO SCHOOL, BUT NOW I WORK AT MCDONALD’S,’” HE SAID.

Russell won’t slow down much in retirement. He’s an avid bowler and spends a lot of his free time at the Northmead Bowling Club.