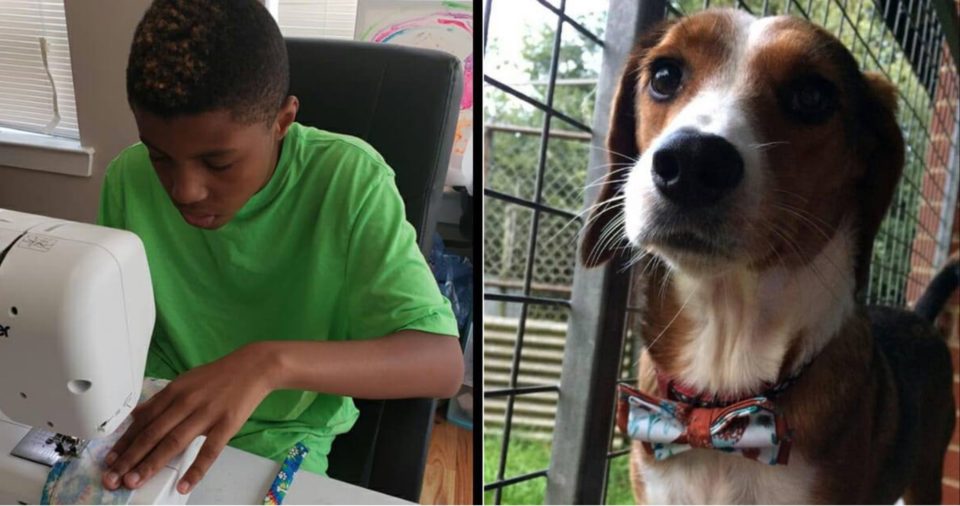 It’s no secret that shelter pets have a hard time. Animals who are meant to be loved and cherished by humans in their forever homes are instead cooped up into small cages or rooms all day.

So, it is always nice to see people who are willing to do their part to help makes these animals‘ stays a little bit easier, and one remarkable young boy named Darius Brown has found a unique way to do just that.

Darius, or Sir Darius Brown, as he often likes to refer to himself, is on a road trip across America making bow ties for shelter pets so they can look like their best selves.

First stop of my #PAW-some Mission is here in my hometown at the Associated Humane Society. These three are so fun and playful and they have a lot of energy. I enjoyed the time I spent with them. I even got a chance to name one of them, “Parker”. He had on the Marvel bow tie. Parker and I formed a bond. He sat in my lap and wanted me to rub him. He did not want me to leave. He whimpered as I walked away. It broke my heart. I did not want to leave him either. Parker and his friends needs a loving home. If you or someone you know would like to adopt any one of the dogs pictured here, you can email me at beauxandpaws@gmail.com or contact the Associated Humane Society at:973.824.7080.@ahsnewark #sirdariusbrown #beauxandpaws #adoptdontshop #adoptapet #savealife #saveapet #newark #nj #doglover #bow tie #ilovedogs #dogs #humanesociety #rescuedogs #rescuedogsofinstagram #rescuedogsrule #shelterdogsrock #bekind #giveback #dapperdogs #divadogs

Darius first began cutting fabric with his sister as an effort to help his fine motor skills, sparking his interest in creating bow ties, at first for people. It was after Hurricane Harvey and Hurricane Irma hit in 2017 that he came up with the idea to use his talents to help animals.

“I saw all the destruction that was happening and I wanted to help but I didn’t know what,” Darius told Rachael Ray last year. “So, I follow a shelter on Facebook and I noticed that dogs were being transferred from Texas to New York. So I thought why not if I donate some of my bow ties to the shelter then the dogs would get adopted faster.”

This summer, Darius, who hails from Newark, New Jersey, aims to visit animal shelters in at least five states to volunteer, provide bow ties, and use his social media profile to shine a spotlight on pets who are in need of a loving home.

Darius has already received a lot of recognition for his work. In addition to the previously mentioned appearance on Rachael Ray, he has been featured in the New York Pet Fashion Show as a designer, and even got a letter from former President Barack Obama applauding his efforts.

#tbt Some people doubted me, laughed at me, criticized me, some even said I was too young. But, I never let any of that negativity stop me. I never gave up. I'm extremely proud to know that I have been former "PRESIDENT BARACK OBAMA APPROVED". ***NEVER GIVE UP ON YOURSELF . . . *** Someone's opinion of you does not have to become your reality -Les Brown @thelesbrown @barackobama #sirdariusbrown #beauxandpaws #barackobamaapproved #barackobama #letterfromobama #lesbrown #motivation #inspire #nevergiveup #goals #philanthropist #blackexcellence #youngentrepreneur #entrepreneur #mentors #faith #integrity #sacrafice #leadership #legacy #iamfisll #youth #dreambelieveachieve @harvey.foundation

And why not, given how snazzy dogs can look in his bow ties.