Michael J. Fox’s son is all grown up – and he looks exactly like him

I can’t tell you exactly why, but I have a weird fascination with spotting the similarities between people from the same family.

It’s especially true when it comes to sons/daughters and their parents – I can genuinely entertain myself by trying to workout which parent a child resembles more.

Yes, it’s probably true that I lead a very boring life, but it makes it all the more fun when I get to see celebrities’ babies grow up and begin to look like their mom or dad. More so, in fact, when I remember when that baby was born, as is the case with Sam Michael Fox.

The 28-year-old is, of course, the son of ’80s icon Michael J. Fox. He’s all grown up now and, well, from recent pictures, he’s going to have a hard time if he ever wants to deny his heritage…

If you were around in the ’80s, you’ll be familiar with Michael J. Fox. The 56-year-old became a hit after appearing on the big screen in things like ‘Teen Wolf’, ‘Family Ties’, and, of course, his most famous role as Marty McFly in the ‘Back to the Future’ franchise.

The ’80s may be but a distant memory, but Fox remains a household name. He continues to make appearances on TV and in film – this despite the fact he’s been battling Parkinson’s disease since 1991, when he was diagnosed at the age of 29. 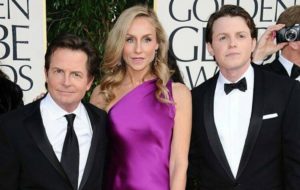 And, whilst we’re sure he’s equally proud of all of them, there can be no denying who carries the most likeness to himself. With Fox having largely kept his children out of the spotlight, glimpses of them have been few and far between.
That’s why it’s a relative shock to see that he has his own doppelgänger in Sam, who lives a quiet life working in sales for a startup firm. 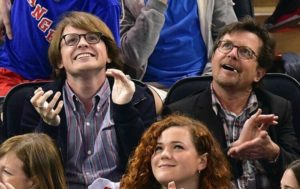 With Michael J. Fox not having outwardly aged all that much, it’s not too difficult to see why the pair are so similar. There’s worse people to look like, I’m sure!

It’s us and the puppy we’re not getting!

Are you a fan of Michael J. Fox? Do you think he and his son look similar? Share this article with your family and friends if so!