When a couple with kids decide to separate it has to be a last resort as the effect that separation can have on the children can be long-lasting.

The more amicable you can be with your ex the better but it’s not always that straightforward.

For some couples it’s difficult to hold back the hatred they have for an ex-partner and often the children are caught in the crossfire.

One little girl was caught in a horrific battle between her separated parents which led to her hair being cut off, an action her mom did to spite her father.

Her father recorded her mom cutting his daughter’s hair while the little girl cries; it’s distressing and has prompted more than 50,000 people to share it.

The girl had stayed with her father and he had taken her to get her hair braided, according to the dad who shared the video on Facebook.

Sharing the video on Facebook, the father said: “I snuck up on my kids at daycare cause dey momma jayla don’t let me see dem an I took my boys to get dey hair cut an got my bby girl hair did look wat her momma do just cause I got my bby hair did.

“I’m gucci but my bby hurt but females talk about dead beats dis why sum [N-words] say f*ck dat sh*t an I remind u she also smushed her bday cake on her bday last year [sic].” 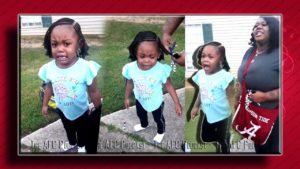 The Alabama mom has come under fire for her actions with many pointing out that this is just punishing the innocent child not the father for his actions.

One woman wrote on Twitter: “Regardless if this isn’t the child’s hair or why the dad took the baby to another chick’s house against the mom’s will, this is horribly traumatic to that baby.

‘Braids too tight’
“People really just don’t understand how early trauma changes a child’s brain permanently.”
According to the Daily Dot the mom stood by her actions saying she liked the style but it was too tight.

“It was pretty, but it was too tight, and I don’t even braid her hair that tight,” she said, according to the Daily Dot. 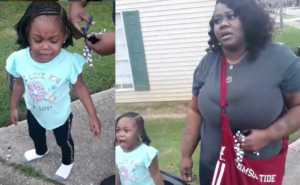