It’s the month of June, which can only mean one thing: the arrival of a (hopefully) glorious summer.

What better way to celebrate this beautiful season than to spend as much time as possible outside?

That said, while we’re outside, it’s important to protect your skin from the sun’s harmful rays. For young children, it’s critical. Just one instance of sunburn can increase their chances of skin cancer later in life.

Mom Rebecca Cannon had sun safety in mind before she took her one-year-old daughter outside in the sun.

But when she sprayed her daughter with an aerosol sunscreen, she was left horrified at what happened to her child’s face.
Rebecca Cannon and her one-year-old daughter were getting ready to enjoy the great outdoors and, like most parents, was ensuring her daughter Kyla was adequately covered up.

She bought a can of spray-on sunblock that was approved for children 6 months and older. She followed the instructions, sprayed it onto her hand and rubbed it on her daughter’s face.

Horrifying experience
The conscientious mom was visiting her sister in Newfoundland, Canada, and made sure her daughter was not only covered in sunscreen but also protective clothing.

What happened next led to a horrifying experience for mom and a painful one for little Kyla. 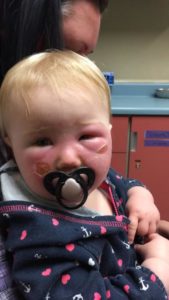 Kyla’s face started to swell and became very red and mom Rebecca couldn’t understand why as she’d covered her up all day.

The next day her daughter’s face had got even worse and she rushed her to the emergency room.

Rebecca hadn’t even used any sunscreen and wasn’t even burnt so couldn’t understand why her daughter was covered in blisters.

The burns had been caused by the spray sunscreen. Since this incident other parents have complained of the same thing happening to their children after using aerosolized sunscreen. 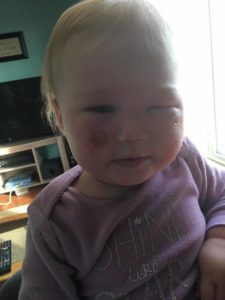 Even though this specific sunscreen was recommended for 6 months and above doctors recommend that children use mineral block sunscreens until they’re about 4 or 5 years old.
“I never thought in a million years that this would happen,” she told Today. “I just want people to do their due diligence when they are putting stuff on their youngsters.”

Please share this article to help warn other parents about the dangers of aerosol sunscreens. Hopefully this doesn’t happen again!