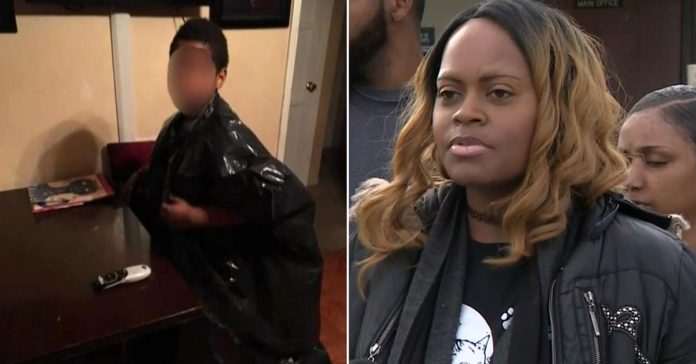 Sonia Mongol is the mother of a school age boy in California who is outraged over the treatment her son received from his teacher when he asked to go to the bathroom.

She claims that her 8-year-old son was ridiculed by having to pee into a trash bin in front of his entire class rather than being allowed to use the restroom.

Last fall, he felt the urge to urinate and asked his teacher for permission to leave the class.

But she refused his request, forcing him to use a trash can positioned in front of the whole class as his urinal.

The teacher further punished the boy by making him wear several garbage bags throughout the day because he had soiled his clothing with urine while peeing.

Sonia was outraged when she saw her son outfitted in garbage bags after returning from class and asked him what happened, taking several photos of the upset child for evidence.

She has complained to the news media about the outrageous treatment her son received, saying that no child deserves this amount of disrespect in school.

She questioned why any adult would humiliate a child in this manner when he was simply making a normal request to use the bathroom.

Representatives for the District say they are disturbed by the events that took place at her son’s school and are continuing with their investigation of what happened, assuring everyone that they plan on taking corrective action against the teacher if necessary.