Raising a teenager is not always the easiest thing to do. And despite many attempts to lead your teen in the right direction, they still don’t always do the right thing.

When Georgia mom Cierra Forney noticed her 13-year-old son displaying some troublesome behavior, she knew she had to do something.

She’d catch him making snap judgments about his classmates who would buy their clothes from stores like Walmart or Goodwill and was not happy at all.

That’s when she decided to teach him a lesson in entitlement and gratitude.

In a viral post on social media: Cierra explained what happened:

“So lately, my 13-year-old son had been acting a little… entitled. Acting like he’s too good to shop at Walmart or making snarky comments about kids at school who shop at the Goodwill and quite a few other things. I don’t tolerate that.”

So she took her son to their local Goodwill. She had her son grab a $20 bill and told him to pick out clothes. He’d have to wear them to school for a week. 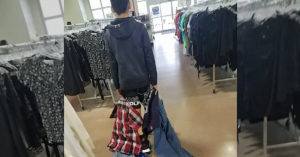 ”Today, he took his own $20.00 to the goodwill to buy clothes to wear the entire week to school. Whatever he found is what he would have to wear. He isn’t happy and shed a few tears but I firmly believe in 15 years he will look back and laugh at the day his Mom made him shop at goodwill.”
”I want to teach my kids that money isn’t everything and if you have to degrade other people because of where they shop, then you too will shop there. Side note, I love the goodwill!!”

Cierra knows that her way of teaching her son a lesson didn’t sit well with some people but says it was important.

And a huge number of people have reacted with most comments praising Cierra for her clever form of punishment. 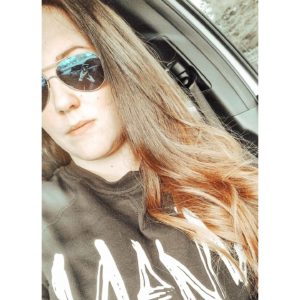 “Great job Mom! Some are less fortunate and shouldn’t be picked on because of where they shop. This will teach him a life long lesson,” wrote on commenter named Nikki, according to The Miami Herald.

However, some people thought the punishment went too far – or maybe not far enough. “A bit harsh. I eagerly worked after school to get what I wanted,” wrote on commenter named Margo.

“I honestly believe people are going too far with this maybe the parents should have thought about how they was raising him before he acts out,” wrote another named Johanna.

In a post on Tuesday, Cierra said she never expected her story and picture to get more than a few dozen reactions.
But she said she made sure her son was okay with her sharing the photo before she did.

“My son learned a valuable lesson from this and I believe it is just another story we can add to our lives memory to look back on. I didn’t do this to punish him. It wasn’t to show him that goodwill isn’t a good place to shop. I did this to teach him that money and name brands don’t change who we are as people,” she wrote.“He can still be the amazing, adorable, loved kid that he is WITHOUT the expensive stores!” 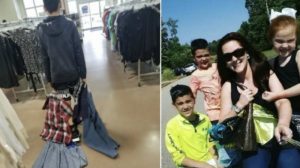 What do you think? Was it right for the mother to punish her rude son this way?

Please share the article with your friends on Facebook if you thought she did the right thing!