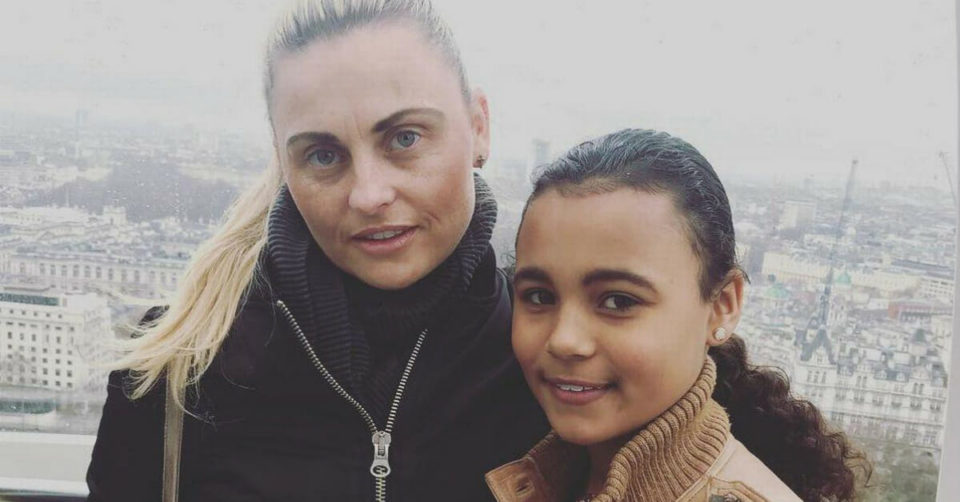 Mother of three, Carla Bellucci, from the UK, is highly concerned about her appearance.

In addition to her usual injections of Botox and Hyaluron, she likes to put herself under the knife to get better jobs as a glamour model.

Now, what you do to your own body in order to feel better is one thing.

But now she wants the whole beauty package for her 14-year-old daughter Tanisha as well – something that has triggered a controversial discussion around the world.

Carla spends about $240-per-month on beauty care for her daughter Tanisha.

Since the girl is only 14 years old, Tanisha’s treatments are currently limited to nail modelling, hair extensions and regular eyebrow tinting.

But if it was up to her mother, the teen would already have several beauty operations behind her.

Fortunately, UK laws prohibit cosmetic surgery on minors. Such ‘treatments’ are only possible in the UK from 16 and onwards.

This hasn’t prevented 37-year-old Carla from saving money for her daughter’s planned efforts.

The single mother, who lives in north London, says she’s putting away $150 a month.

“Tanisha isn’t the most academic of girls, so I don’t really care about her education, unlike with my boys,” Carla told Closer magazine.

In an interview, the mom of three also revealed which spot she would like to have fixed for her daughter.

“At the moment she loves the Kardashian look with the big bum and boobs and pouty lips. She’s going to get fillers when she is 16, which I fully support,” Carla says.

According to her mom, Tanisha’s bottom is ”very flat” and needs ”improving”.

“If she wants to be a successful influencer and reality star then she will have to fit the look of the time – so surgery is the obvious option. She’s good looking, but surgery will make her prettier.”
When Tanisha turns 18, her mom has different procedures planned for her.

In addition to breast implants and teeth veneers, Carla is encouraging her daughter to get the highly controversial Brazilian bum-lift, consisting of fat grafting that is notable for its natural-looking results.

But what sounds harmless at first is associated with significant risks. This procedure is one of the most dangerous plastic surgeries around, since there is a risk of accidentally injecting body fat into a vein.

With several reports of patient deaths from undergoing BBL, many have now labeled it as the most dangerous cosmetic procedure.

“I know what I want and I’ll find the best way to get it,” Tanisha told Closer Magazine.

“Surgery doesn’t worry me. Mum’s had it and she’s fine.”

A post shared by Tanisha Bellucci (@officialtanishabellucci) on Jul 15, 2019 at 7:39am PDT

For the still so young Tanisha, I can only hope that she realizes that not everything is about looks.

Real beauty comes from within. And what about building self-esteem, and confidence? Combine this with education in the field she may wish to pursue.

Teach your children beauty comes from within. It is the size of your heart and how you treat people, not how you look.

This woman certainly shouldn’t be called a mother …

What do you think about it?