Nurse finds crying baby in hospital, things get worse when they lift his blanket

Being born with a deformity is one thing but being rejected by your mother because of those deformities is a whole other matter.

That was exactly what happened to little Gabe. He was just a few days old when he lost everything.

He was born in Brazil, and when he was only two days old, his mother left him at an orphanage.

When the mother saw him, she was disappointed and decided to abandon him.

There he was, lying alone in a hospital bed all day. Gabe’s condition meant that his chance of being adopted was merely nothing.

But one mother would soon change everything.
19 years ago Gabe was born in Brazil, without any arms or legs.

The doctors soon realized that he had a rare condition called Hanhart syndrome, characterised by underdeveloped limbs, mouth and jaw. In Gabe’s case none of his limbs grew at all.

According to the National Organization for Rare Disorders, the Hanhart syndrome is a rare birth defect with no known cause.

Gabe’s birth mother didn’t want him, so she left him there at the hospital. 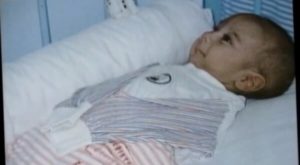 Gabe’s future looked bleak. He seemed destined to a lonely life confined to a hospital bed. The chances of him being adopted were very small, because he didn’t look like the other children at all.

But one day in the United States, Janelle Adams saw Gabe’s picture in a supermarket and decided that she wanted to help him.

Many people who passed the picture must have felt the same way, but Janelle couldn’t get the toddler out of her mind.

Instinctively, Janelle knew she wanted to give this child a home.
Janelle and her husband, who live in Ohio, already had 13 children, adding Gabe to the family wasn’t an easy decision.

“We had our concerns, but I couldn’t stop thinking about the sweet little boy so far away without arms, legs or a family,” Janelle told Today. 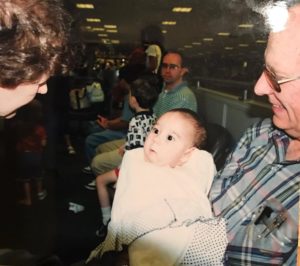 But finally, Janelle managed to track down the oprhanage where Gabe lived and set the adoption process into motion.

The adoption didn’t move quickly, but after the paperwork was finished, Janelle and her husband, Ron, were finally able to go the airport and pick up their long-awaited son.
It was love at first sight. Gabe arrived when he was an infant and absolutely thrived with his family.

From a young age Gabe started using a wheelchair but his parents were determined that their son would be as independent as possible.

When he was 12 years old, Gabe could do almost everything that other children his age could do, despite his disabilities. 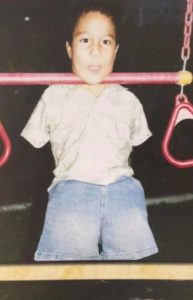 He could dress himself, walk, eat, and swim. And he could even walk up stairs without help.

At school Gabe tried out for the dance team as a way of making friends – discovering he could use his limbless body to his advantage in the art of break dancing.

After graduating from high school Gabe has continued to prove his independence, moving out of the family home and embarking on a career as a motivational speaker.

The boy’s parents wanted him to become independent and not need to depend on others his whole life. 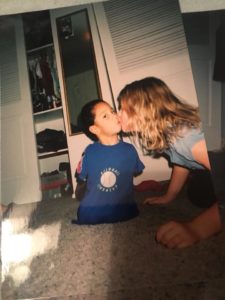 “It has always been our goal to allow Gabe freedom and choices, that we know it will only come if he can independent,” says Gabe’s father.

But it hasn’t been easy.

While his siblings experience of school was more atypical – proms, sports teams and dating, for Gabe it was a daily onslaught of cruel comments and bullying.

“I was in the art class one time and our art teacher told us to critique our neighbour’s artwork. This kid said to me: ‘It looks like God made a mistake on you’. I went home that day and I was crushed. I couldn’t get that out of my head”, Gabe told Barcroft TV. 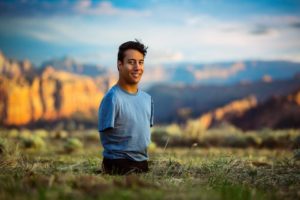 When the Adams family adopted Gabe, they thought they were just saving him from a lonely life in a hospital bed.

But they quickly realized that it was Gabe who saved them. He’s taught them about what’s actually important in life. And he’s taught them to work harder and never give up. 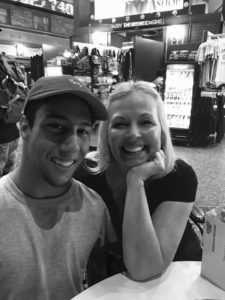 “I hated my parents for making me going through all that hard work, but now I look at them and celebrate that they pushed me to be independent and be the person that they knew I could be”, Gabe said.

From the beginning, Janelle and Ron treated Gabe as their own. And the more the boy learned to manage himself, the more independent he became.
Since becoming a part of his high school dance team, Gabe has gone on to compete in a dance competition, placing second and even appeared on the Maury Show. 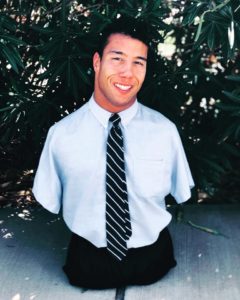 And as his confidence as a dancer has grown, Gabe is now pursuing a career as a motivational speaker.

Please share Gabe’s story with your friends on Facebook if you were also inspired by his winning attitude!