People refused to hire man with autism, so he opened own coffee shop and employs staff with special needs

It’s shocking when you consider the sheer volume of people who are capable, despite their disability, but aren’t given a chance to prove themselves in the workplace.

Only 19 percent of people with a disability in the U.S. will find work in contrast to 65 per cent of those without a disability, according to the Bureau of Labor Statistics.

When Michael Coyne participated in a program in the hospitality field he had dreams of working in a restaurant but said every employment door was closed in his face and with it his frustration grew.

Michael, from Rhode Island, lives with a range of disabilities including attention deficit hyperactivity disorder (ADHD) bipolar and autism but you wouldn’t know it if you saw him in action in his coffee shop.

During his time as a Special Olympics athlete he completed the hospitality program hoping to get a job in the industry after but nobody would give him a chance. So instead of wallowing in self pity and giving up he opened his own coffee shop with his business partner – his mom.

His mom Shelia Coyne said the business also employs others with special needs. 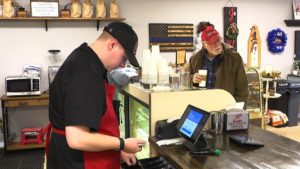 “As parents we look at our kids and we see the value, we see what they have, we see what they’re capable of instead of the system that’s constantly labeling them, putting up barriers,” she told Fox News.
She said the coffee shop was part of the community so there was learning on both sides.

Educating the community
“We show people ‘yes he has a disability but look what he’s doing’ and he (Michael) learns social skills,” she said.

Michael’s story has inspired people from around the nation and a family from California has even written him a card to congratulate him on his success and telling him how brave he is.

And we think so too! What an inspiration this young man is, not only achieving success for himself but helping to inspire others and educate his community about people with disabilities.
We all deserve to be given a chance. Please share if you agree.