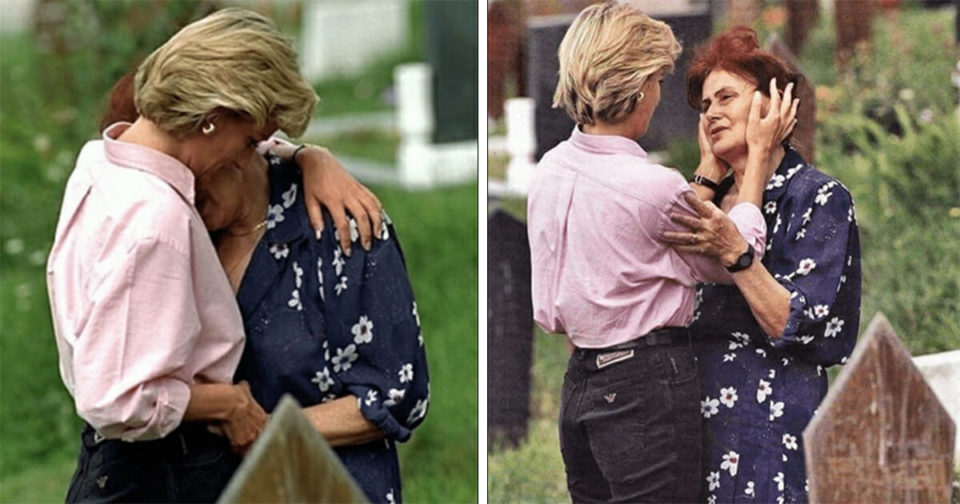 Princess Diana may be gone, but her legacy will remain forever.

The much-celebrated Princess of Wales continues to inspire the world, despite the fact she passed away over 20 years ago. Even now we hear stories of her enduring kindness and unique compassion, even now we’re reminded of just why she came to be known as “The People’s Princess”.

Diana was reputed for the fact that there was no land too far, no boundary too great to be crossed in the name of helping others. On the eve of the 22nd anniversary of her death, we look back at one of the many times she proved she was, simply, too good for this world.

It was only a few weeks before her tragic death on August 31, 1997, and Diana was on a humanitarian trip to Bosnia as part of her fight to raise awareness concerning landmines.

Diana was accompanied by Ken Rutherford and Jerry White on the trip, which would transpire to be her last of the kind.

In 2017, almost 20 years to the day when she was killed, the pair recounted their journey for a HBO documentary titled “Diana, Our Mother: Her Life and Legacy”.

Speaking to Entertainment Weekly, Rutherford and White shared several stories from their time with Diana in Bosnia, though it was one of White’s that perhaps stands out the most.

It concerns an unplanned detour to the Sarajevo War Cemetery on August 10, 1997.
White recalled: “The image of her in a cemetery in Sarajevo, on the last day of our three-day trip [still haunts me]. It wasn’t planned. It was never on the itinerary. But Diana told me three times, ‘I can’t get this picture of me in a cemetery out of my mind.’

“She asked me if there was a cemetery nearby, as it was something we should visit. ‘Jerry, I have this feeling, this image of me in a cemetery, it’s strange.’ We were running late for a final reception, and there was no room for this detour, but Princess Diana seemed adamant, mysteriously.

“So, we drove out of the way to the former Olympic stadium that had become a massive graveyard for those killed during the war. I watched as Diana took her place among hundreds of tombstones. It was eerie, now that I reflect on it. She walked slowly, among tombstones and even yellow rose bushes.

“She met a Bosnian mother tending to the grave of her son, grieving visibly. Diana didn’t speak Bosnian, and this mother didn’t know English. So, they just embraced. So intimately, so physical, so emotional, mother-to-mother.”

August 10, 1997- Princess Diana comforts Svetlana Dragon grieving at her soilder son's grave who died in the Srebrenica-War. Diana and her team drove past a war cemetery and she asked if the van could be stopped. She went over and looked at some of the graves and she saw Svetlana crying at her son's grave. Without speaking the same language or saying anything Diana went over and comforted the grieving woman. This was the real Diana.

Continuing, White said: “It was vintage Diana, reaching out, wiping the mother’s tears and cheeks. It’s the only framed photograph of Diana I still have in my home.

“After her death in Paris only weeks later, I came to wonder whether the Princess intuited her own death, her burial. I don’t know, but maybe, psychically, intuitively, Diana sensed she was going to die. It still gives me chills when I recall this powerful, unscripted, unplanned moment, somehow prescient.”

That sounds like the Diana we all fondly remember and love. She was always putting others first, and knew no limits when it came to dreaming of a better future for us all.

Princess Diana was cruelly taken from us on August 31, 1997. Who knows what incredible things she would have gone on to achieve.
Please help us honor his wonderful woman’s memory by sharing this article on Facebook.