Skeletal dog found tied to a tree in the forest, left alone to die of starvation

A group of cyclists in Portugal were out enjoying the beautiful scenery cycling through a forest in Portugal.

But instead of enjoying the view they encountered a heartbreaking scene; a dog tied to a tree so tightly it could barely move its head and so weak with hunger it could barely stand.
When the cyclists saw the dog they could hardly believe their eyes. Some heartless person had bound the dog to a tree in a deserted forest area.

The dog was tied up so tightly, she could barely move. 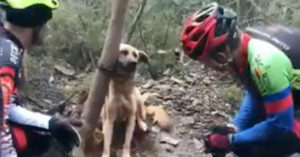 It is unclear how long the dog had been there when she was found by the cyclists. But she was very weak and could barely move. As you can see in the video, her ribs have started to show so was probably without food for a good few days.

Whoever was responsible for this cruel act must have known that the dog would starve to death.
Found in time by cyclists
Thankfully, the cyclists were in the area and saw the dog; she was too weak to bark.

A couple of the men cautiously pet her and let her smell their scent to gain their trust, while the rest offer her food. The food seems to calm her down and while she’s distracted one of the cyclists cut her free.

Hailed as heroes
Several animal organizations in Portugal have reported on the terrible case and praised the cyclists, hailing them heroes for rescuing this poor hound.
I cannot understand how anyone can even think of tying a dog to a tree in the woods and letting it starve to death. It’s cruel beyond words. Thank goodness this group of cyclists came along and found her in time.

I hope this dog recovers from her terrible ordeal and gets to find a forever home where she gets all the love and security she deserves. Please share to pay tribute to this group of animal heroes!