Teen captured on camera throwing tiny kitten into lake, only for cops to show up and deliver justice

Try as I might, I will never be able to understand what goes through the minds of people who hurt helpless animals.

If your life is on the line then I can appreciate you might have to do things you wouldn’t normally do, but the idea of hurting an animal just because you can? That shouldn’t sit right with anyone in their right mind.

Which is why it’s important that we raise awareness of animal cruelty wherever it’s found, and aim to bring to justice those who harm innocent creatures for their own entertainment. 19-year-old Garrett Haile went viral the year before last, having featured in a video wherein he was seen throwing a kitten into a lake.

Charged
Haile, who was a minor at the time when the video was shot, used Snapchat to record and post the video. It’s unknown whether or not the kitten survived, but the teen certainly landed himself in hot water.

Nicole Pinheiro shared the video, and played a role in bringing Haile to justice.

“My heart, it just left my body,” she said. “And I showed my mom, and she burst into tears. She was like, ‘I can’t believe that this is the world right now.’” 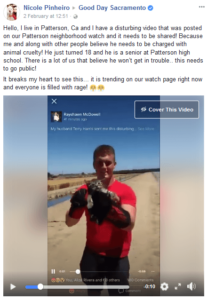 With Nicole having posted it on social media, a fire quickly spread around the internet. Thousands of furious people then shared the clip, helping to make Haile infamous.