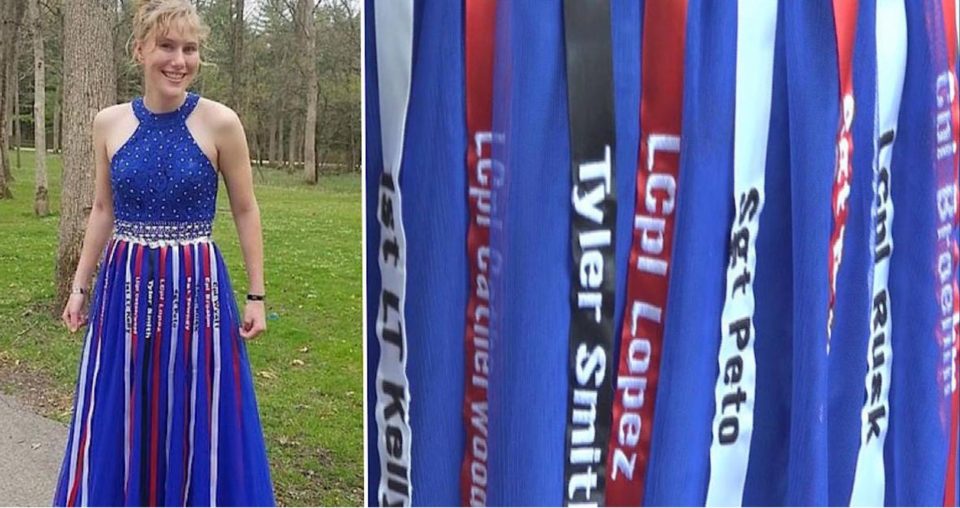 Prom time for teens is a time to kick back, relax and have some fun.

Often the focus is on the outfit or who you’re taking; it’s never serious considerations.

But for one high school student her thoughts on such a special evening was focused on something very serious.

Aubrey Headon was thinking about 25 fallen Marines when she attended her prom. Her dress was the result of two years of hard work and images of it have captured the hearts of the nation. On the face of it, the dress resembles the U.S. flag but it’s the detail that has captured the attention of the world’s press and thousands on social media.

Aubrey Headon, who attends Rochelle Township High School in Rochelle, Ill., learned of 25 marines who lost their lives in Afghanistan.

Men’s sacrifice
The men were members of the 3rd Battalion, 5th Marines, also known as 3/5 or Darkhorse, and were killed in action while conducting operations in the Sangin District of Helmand Province.

Hearing about the men’s sacrifice moved the Illinois teen so much she wanted to do something to honor them. She spent two years creating the dress which has the names of the fallen marines written on ribbons that hang from the waistband.

“I wanted to wear this tribute dress [to] my senior prom so the memories of the guys who fell in Afghanistan for our right to live how we do and do what we do every day is carried on,” Aubrey told Yahoo Lifestyle. “

Dedicated to her friend
“I don’t want them to fade into nothing.”

Aubrey said she was inspired after meeting the mother of one of the fallen heroes, Gretchen Catherwood.
One of the ribbons is dedicated to her friend Tyler Smith who drowned last year; he was in the National Guard. “She(Gretchen Catherwood) started the Darkhorse Lodge to help combat veterans. I do a fundraiser every year to donate to the lodge,” Headon said.

Since posting her dress on social media, Aubrey has received hundreds of messages of support and attracted the attention of the media both nationally and internationally.

Find out more about this remarkable young lady and her incredible dress in the video below.

Such a wonderful way to honor these heroes.

Please share so more people know about this inspirational young lady and the fallen marines who sacrificed their lives to keep us safe.