This Dachshund had the most adorable newborn photoshoot after giving birth to six puppies!

Belinda Sol is a photographer who helps new moms celebrate the joys of having a child. So when her client, Mona, called her requesting a photoshoot, she thought that it would be like her other regular sessions.

But when she returned Mona’s call, it turned out that she had other plans in mind. The photoshoot wasn’t for herself but for Mia, her pregnant Dachshund! 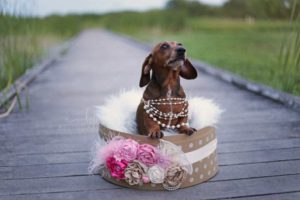 “I had never done [a dog shoot] before, and I was excited to do so,” Belinda said. The photographer took on the challenge and prepared for it, making a dress for Mia and even buying some props to use on the shoot.

“I went and made her a maternity dress, purchased some props especially for her, and made our appointment,” she said. 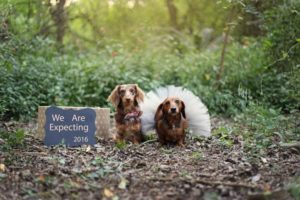 On the day of the shoot, the expecting mom was, of course, accompanied by the proud husband and soon-to-be father.
The session went well as Mia was so behaved and well-trained. Add the fact that she was very pregnant during the time, so she didn’t go and scamper around that much. 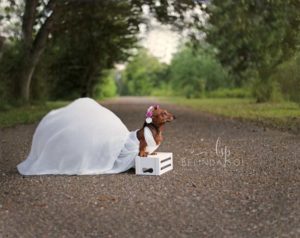 When Belinda uploaded the snapshots on Facebook, she expected only a moderate response. But then, she found thousands of people swooning over the adorable pictures and leaving positive comments. That’s when she knew that her photoshoot with Mia wasn’t over – they would have to do a newborn shoot, too!

Soon after, Mia gave birth to six adorable sausage puppies and Belinda was there once again, this time, to capture her new bundle of joy. 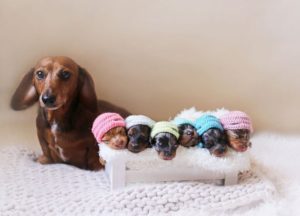 And just when you thought a six-pup photoshoot couldn’t get any cuter, Belinda had tiny crocheted caps made just for them! These custom-made head wear were created by Crochet Creations by Rebecca Monroe. 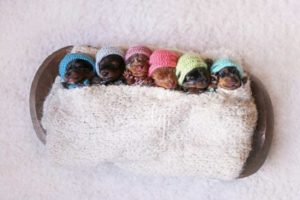 The hats just look perfect on them, don’t they?
Belinda captured the puppies the same way that she captures human babies. Lots of swaddles, cuddling, and of course, tiny hats, were involved. The pups even got their own beauty shots. 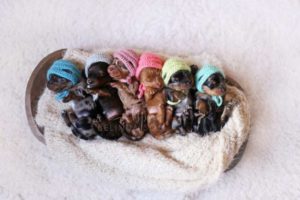 Like their human counterparts, the teeny puppies just napped for most of the photoshoot’s duration. 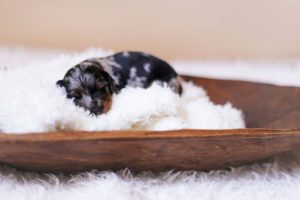 Looking at these photos, we couldn’t help but want to take them all home!