Search crews say they have found the missing Magoffin County toddler days after he disappeared from his home.

Family members believed their youngster simply walked out of the house.

Kentucky State Police told Lexington Herald Leader that the boy was found around a mile away from his home at an old strip mine, at the Magoffin-Floyd county line.

A panic-stricken father, Elden Howard, told WYMT he has no idea where his son went.

“Yeah, it’s just like he disappeared. No sign, no nothing. That’s the reason I’m starting to think, if we can’t find him, somebody’s picked him up,” he said.

The colder, wetter weather conditions were also a cause for concern.

“It’s gut-wrenching. It really is,” emergency manager and family friend Robert Prater told WKYT.com. “As cool as it got last night and the rain, you start to worry about hypothermia.” 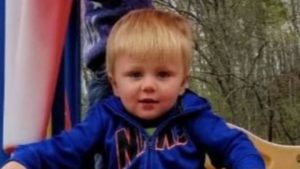 The Magoffin County Rescue Squad said he is being treated for dehydration, but he is in “remarkably good condition.”